As an increasing number of people are transitioning away from animal products, vegan alternatives are quickly showing up in stores and restaurants all around the world.  Not only are vegan products much better for the environment, but they are often healthier than their non-vegan counterparts.

Planted Foods Vegan Nacho Sauce is one such example of a plant-based alternative to a beloved item: cheese!  Cheese is loved by many, and for good reason.  However, there are some health and environmental concerns associated with dairy products like cheese.  Let’s explore why dairy alternatives are becoming increasingly more popular and why so many people are choosing to eliminate dairy from their diets.

The Health and Environmental Impacts of Dairy

While considered delicious by many, dairy products are the culprit of various health and environmental issues that affect both us as individuals, and the planet as a whole.

About 75% of the global population is lactose intolerant, suggesting that dairy is not a necessary component of one’s diet.  Contrary to popular belief, there is no correlation between dairy and bone health, and consuming dairy products may even be associated with an increase in bone fractures.  On top of that, dairy contains high amounts of saturated fat and cholesterol, which can lead to a greater risk of heart disease and some forms of cancer.

Not only are there numerous health concerns associated with dairy, but there are also some environmental issues that are attributed to the industry.  One of the main problems with dairy farming is its impact on atmospheric emissions.  The production of dairy and livestock releases carbon dioxide and methane gases into the atmosphere, which trap heat and warm the planet.  Dairy production is also a very water-intensive process, with operations using up to 150 gallons of water per cow per day.

Dairy’s health and environmental impacts and the growing number of people transitioning to a plant-based diet have led to the creation of many different vegan products.  Hence, the creation of Planted Foods. 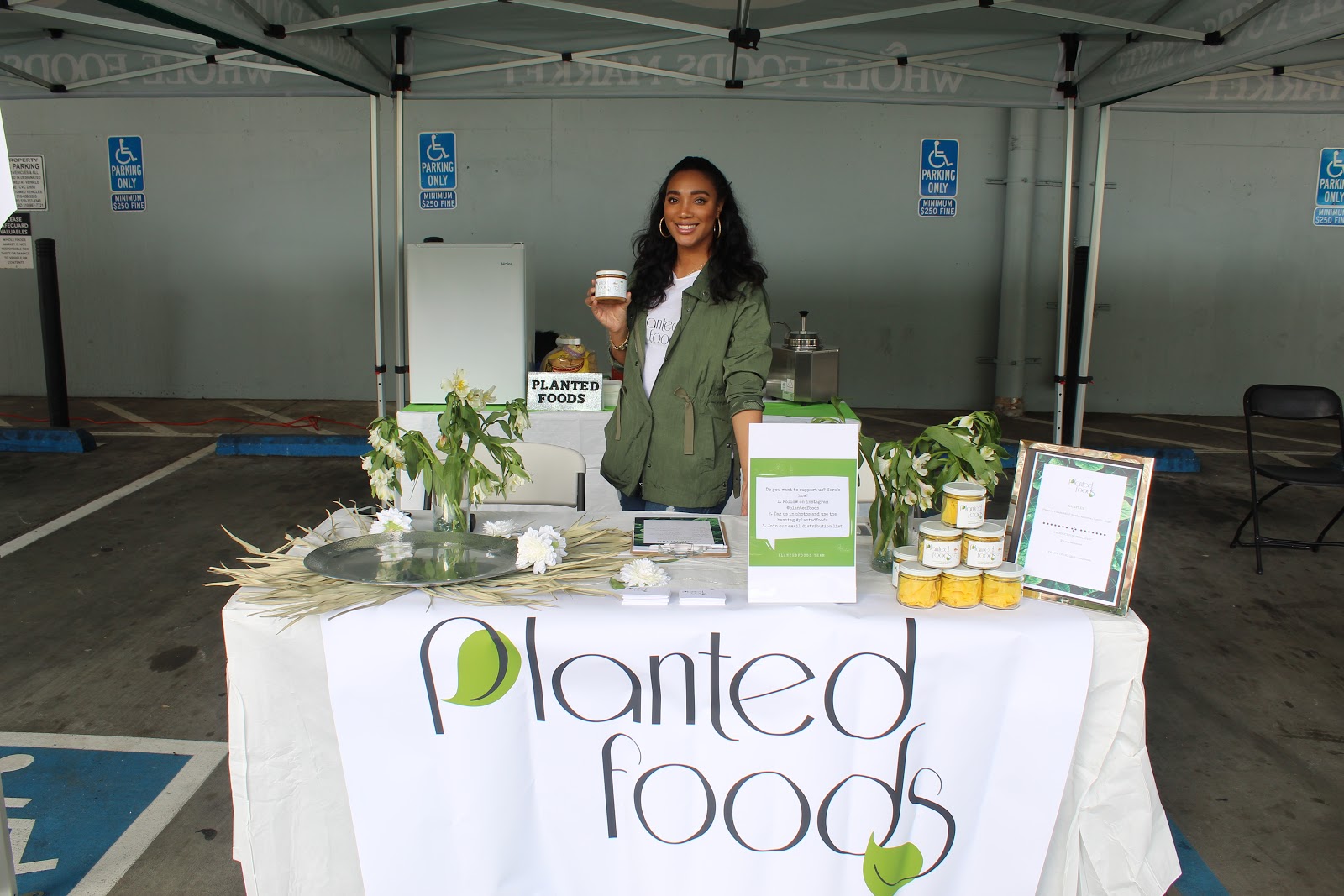 Founded in 2018 by Ashley Kirk, Planted Foods is a company that prides itself on creating completely natural and plant-based products.  Their mission is to create foods from ingredients that are simple and familiar, never complicated or artificial.

Back in 2016, Kirk began having frequent migraines from stress and anxiety.  While her physician recommended medication, Kirk believed there was a way to naturally rid the migraines by changing her diet.

Upon researching plant-based diets, she decided to give veganism a chance.  After just one week, Kirk noticed an increase in energy and mental clarity, and her migraines had disappeared.  However, she was tired of seeing vegan products made from unnatural, unhealthy ingredients and decided to do something about it.

“With a busy schedule, it wasn’t feasible to make everything myself. Searching for prepackaged plant-based food in the grocery store proved to be a bit of a challenge,” Kirk shared in an interview with Planet Home. “It was so confusing reading labels trying to determine what some of the questionable ingredients were; like xanthan gum and yellow 5.”

“Planted Foods was developed out of my passion for how a plant-based diet changed my life and wanting to do the same for others,” Kirk said. “I wanted to develop a brand that put health first. We are a brand that is intentional about ingredients, sourcing, and  introducing clarity in the food space.” 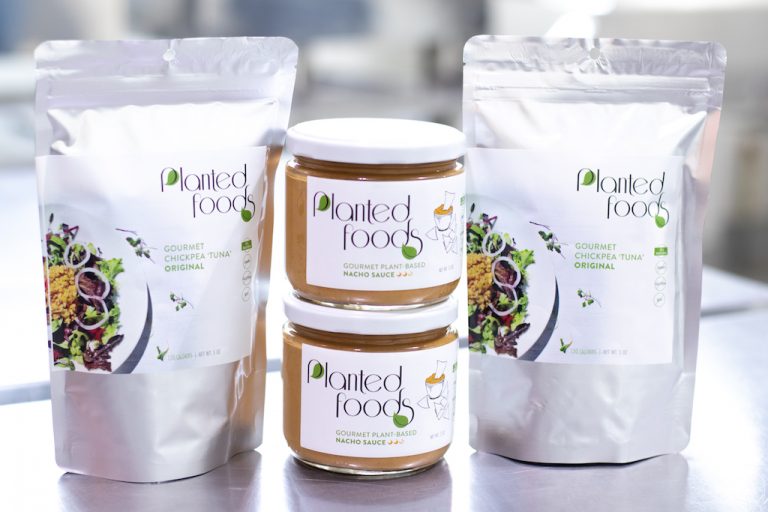 Kirk also wanted to recreate plant-based alternatives to familiar foods. After changing her own diet, she wanted to continue eating foods that were similar to what she was used to – a feeling many plant-based eaters can relate to. This inspired her creation of a chickpea tuna substitute!

While you wait to get your hands on the popular product, you can start planning out your meals with the quick and delicious recipes below.  Oh, and did I mention they’re vegan? 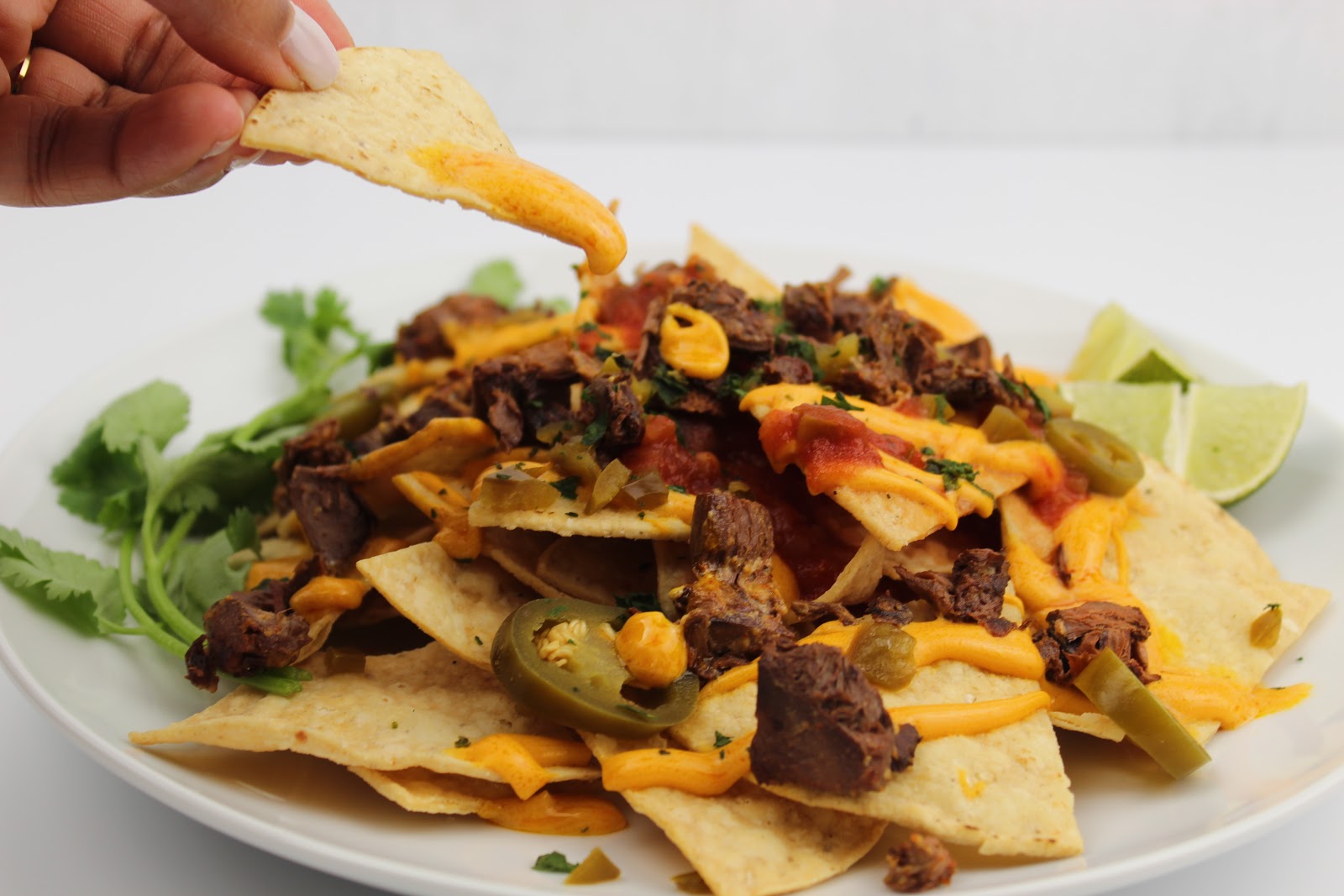 Pulled jackfruit nachos are a favorite of mine.  Not only are they extremely simple to make, but they’re delicious too!  Pulled jackfruit is similar in texture to pulled chicken and soaks up a lot of flavor.  So for those who are looking for a meal to make on “Meatless Monday” (or any other day of the week), these are perfect!

3. Add Vegan Nacho Sauce (how much depends on preference) to separate pot and cook for 2-3 minutes on medium high heat, stirring frequently.

4. Top tortilla chips with everything and customize nachos however you like.  Enjoy! 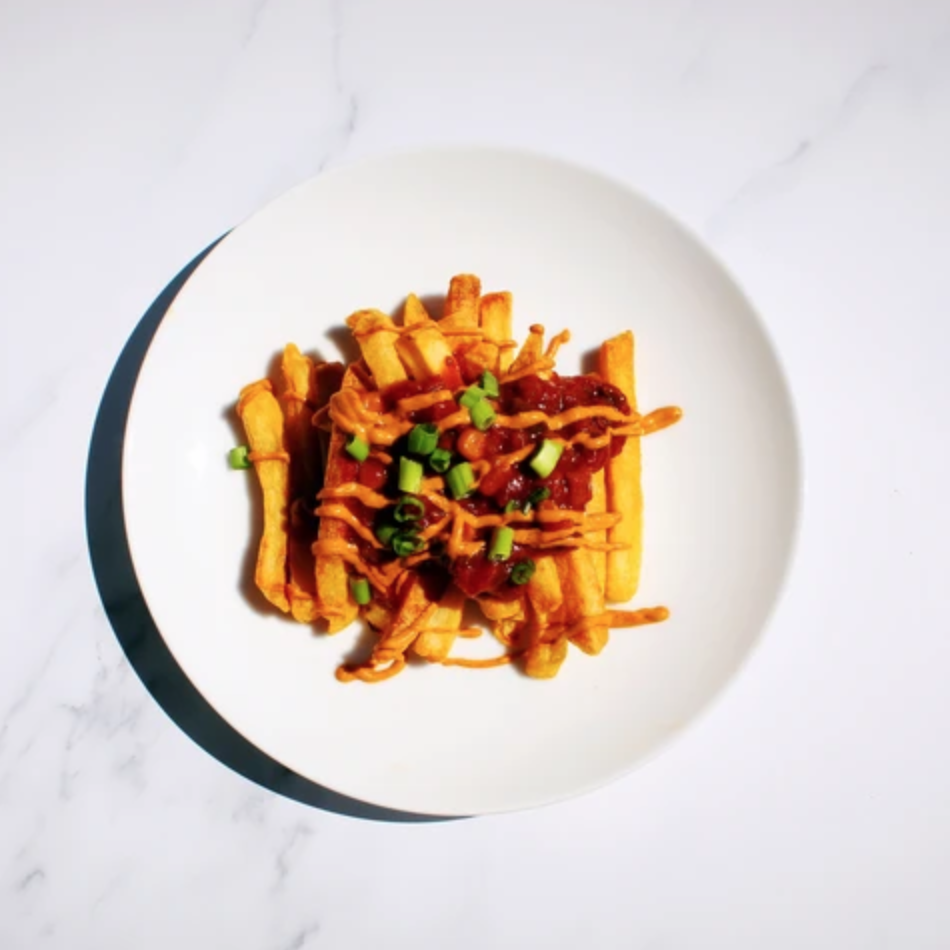 Chili is good by itself.  French fries are good by themselves.  But chili, french fries, and Vegan Nacho Sauce all in one recipe?  You’ll fall in love at first bite!

1. Cut potatoes into slices.  Drizzle with olive oil and salt and pepper for taste.  Bake at 400 ˚F until crispy.  If using frozen fries, see package instructions for how to bake.

2. Add olive oil to large pot over medium-high heat.  Add chopped onion and cook for 3-4 minutes.  Add garlic and cook for about 1 minute.

3. Add the rest of the chili ingredients and stir to combine.  Bring to a boil, then lower heat to a simmer.  Cook for 15-20 minutes.

5. Once fries are done baking, let cool and top with chili, Vegan Nacho Sauce, and any other desired garnishes.  Enjoy! 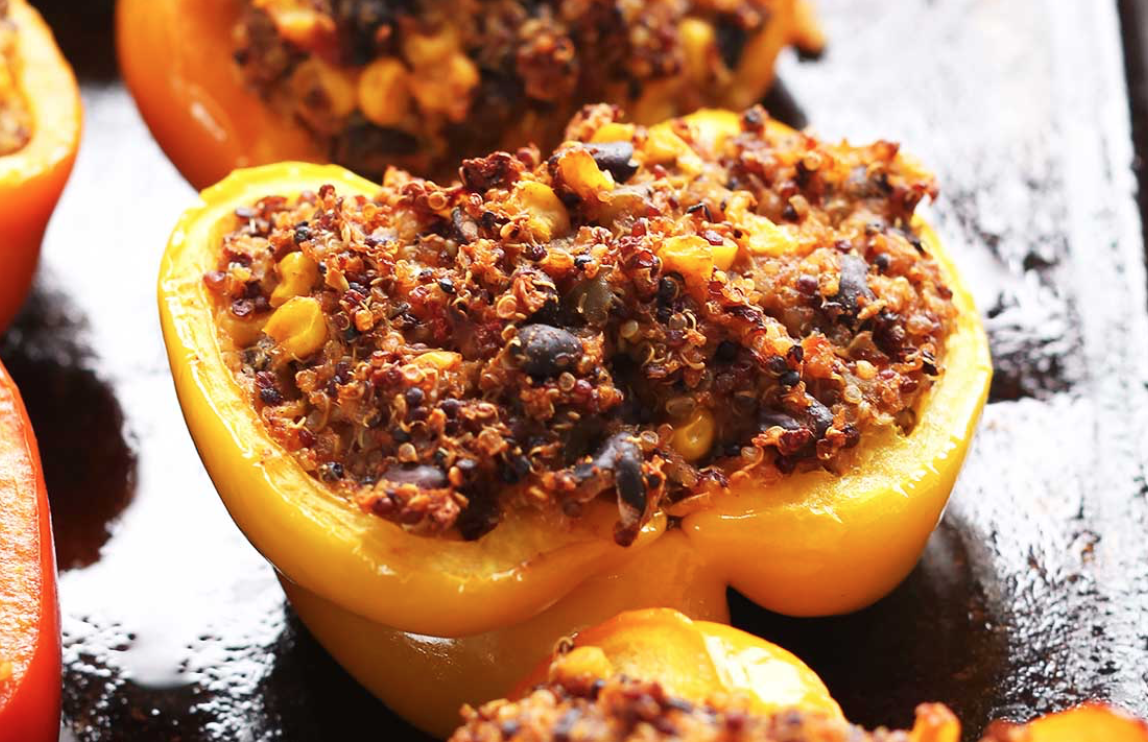 Stuffed peppers are a filling and healthy meal that can be served as a main course, or as a side dish.  The best part is you can fill them with pretty much anything!  This recipe focuses on a more Mexican-style stuffed pepper, but go ahead and experiment with them if that’s your thing!

1. Add quinoa and vegetable stock to saucepan and boil over high heat.  Once boiling, reduce heat, cover, and simmer for about 20 minutes, or until all liquid is absorbed.

3. Brush halved peppers with high heat oil, such as avocado or coconut.

5. Stuff halved peppers with mixture and cover the dish with foil.

8. Spread nacho sauce over filled peppers with any other desired garnishes.  Enjoy! 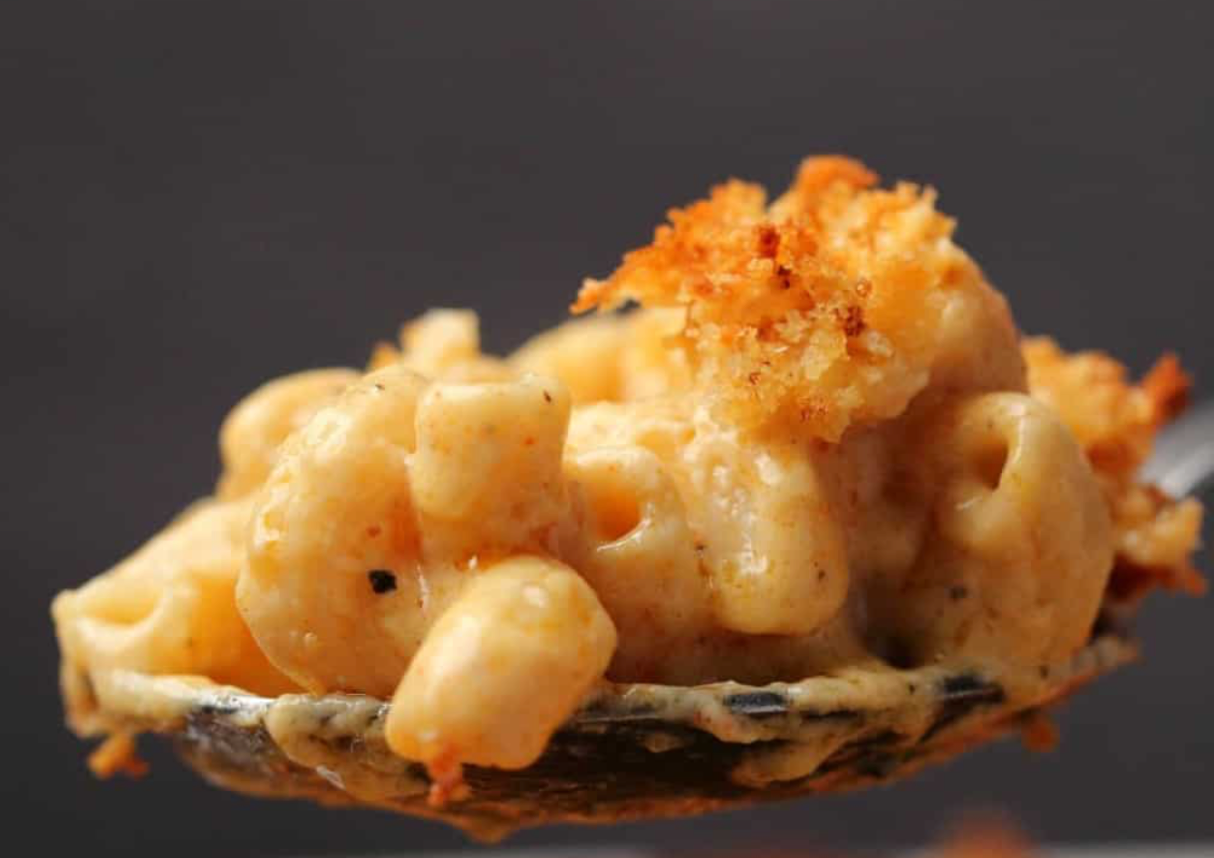 Ah yes, mac and cheese.  It’s the comfort food that we all love.  But who knew you could make it into a vegan dish?  With Planted Foods Vegan Nacho Sauce, it’s never been easier!

1. On medium-high heat, use desired amount of Vegan Nacho Sauce and heat, stirring frequently.  Add any desired spices to add some additional flavor.  Once the sauce begins to boil, remove from heat.

2. Cook macaroni according to package instructions and drain after finished.

5. Add 3 slices of toasted white bread to blender and pulse until you have crumbs.  You can also break bread into crumbs by hand.  Transfer to a mixing bowl and add oil, tossing bread crumbs around until covered.

7. Bake for 20 minutes until topping is golden brown and crispy.  Enjoy!

With the many environmental and health impacts of dairy and so many plant-based alternatives on the market today, transitioning away from dairy has never been easier.  Hopefully the above recipes gave you some meal inspiration and a new perspective on just how healthy (and delicious) a plant-based diet can be.